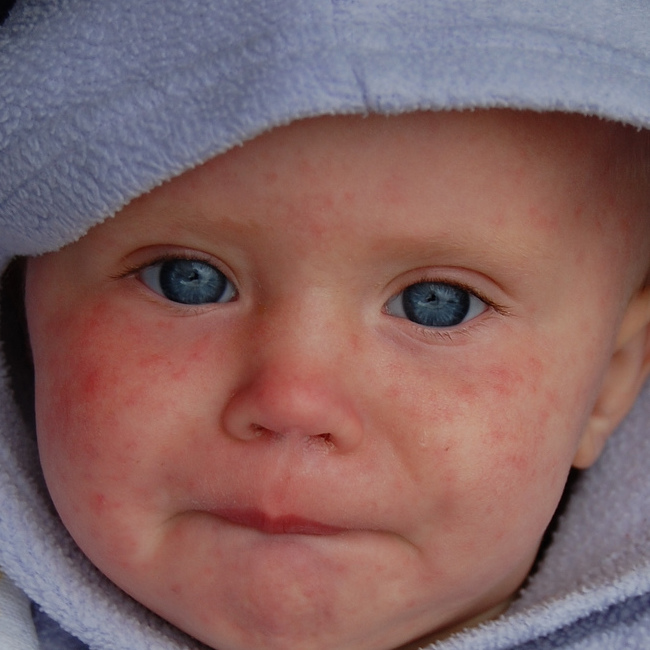 The Cajun Navy – people who rally their personal boats to rescue hurricane survivors – is an example of how ordinary citizens are the true first responders in a disaster zone. Instead of seeing locals as liabilities, the Federal Emergency Management Agency has started looking for ways to support their work.

As David Graham wrote in The Atlantic:

“When you step back and look at most disasters, you talk about first responders—lights and sirens—that’s bullshit,” Craig Fugate, who headed FEMA during the Obama presidency, told me in 2015. “The first responders are the neighbors, bystanders, the people that are willing to act.”

That underpinned “whole-community response,” the principle around which Fugate organized FEMA during his eight years in office…The basis for whole-community response is that, while the government simply can never provide a response as quickly as needed, a top-down response from the government isn’t the best answer anyway. Local people know much better what they need, and they benefit from being involved.

I think we need to create a “whole-community response” in health and health care. We need to acknowledge that our “locals” (aka patients, caregivers, and other non-professionals) are essential partners in a health crisis.

Now, where to start? Personally, the ripest target I see is the resurgence of vaccine-preventable diseases, such as measles. Misinformation about vaccine safety is the number one issue that people bring up when I talk about peer-to-peer health advice – and for good reason. Anti-vax voices are very loud on social platforms and they have been wickedly effective at grabbing the attention of people who are hesitant about immunizing their children. For a long time, I didn’t have an answer for critics who said we should discourage ALL peer health advice because of this very real, very awful negative consequence of people finding these sources of misinformation online. I needed a way to stretch out the tangle of anecdotes and stories, to show people a different view of the situation.

I’ve been working on a model to try to explain what I see as an opportunity to call out our own version of the Cajun Navy: 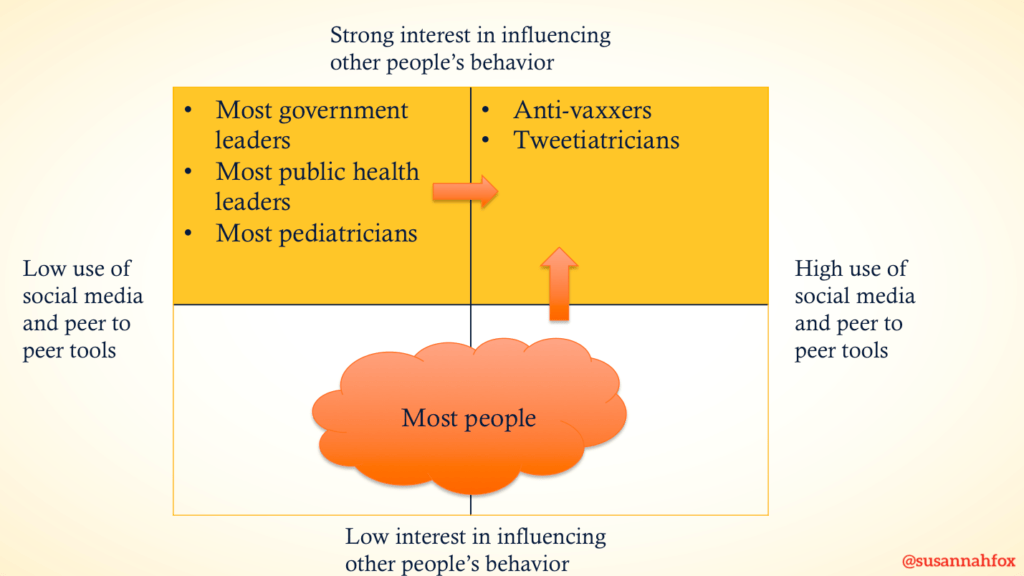 The vertical axis represents strength of interest in influencing other people’s behavior related to vaccine (strong at the top, low at the bottom).

The horizontal axis represents use of social media and peer-to-peer tools. At the left side are those who have zero or low engagement with those tools. At the right are people who use those tools often.

I should note that I was limited by space when I created this slide. If I could, I’d add the concept of ineffective vs. effective use of social media and peer tools to the horizontal axis.

Organizations and people I would put in the top left quadrant include most government leaders, most public health leaders, and most pediatricians.

Organizations and people I would put in the top right quadrant include anti-vaxxers and “Tweetiatricians” (pediatricians who use Twitter and other social tools well, like Wendy Sue Swanson, MD).

Anti-vaxxers are skilled at using peer to peer networks, online and offline, while the government and most pediatricians and advocates are not. The first step to solving this, though, is recognizing that we on the side of science and disease prevention have a problem. We need to engage in peer networks and help boost the signal for science among those who already have clout in their peer health advice networks.

How might we move more people from the left side to the right? How might we upgrade people’s skills and engagement?

The whole bottom half of the chart is filled with what I would characterize as most Americans. Most people (93% according to the U.S. Surgeon General) vaccinate their children on time. But we need 95% for herd immunity. And the vaccination rate in some communities is much lower. How might we motivate people to take part in peer-to-peer conversations about vaccines — how safe and effective they are, how awful the diseases are if we don’t keep them at bay.

How might we pull more people from the bottom half of the graph to the top right? That is, how might we pull more potential allies off the bench and onto the field? Some people in the bottom right quadrant are highly skilled at social media and would be fabulous allies. Others may not yet be active in this area of life, but could be motivated to engage if they see a threat to their own families.

For example, we can learn from people like Kim Nelson, a field marshal in the fight against misinformation. As Alex Olgin of NPR reported:

“Nelson started her own group, South Carolina Parents for Vaccines. She began posting scientific articles online. She started responding to private messages from concerned parents with specific questions. She also found that positive reinforcement was important and would roam around the mom groups, sprinkling affirmations when people get their kids’ shots done.

“Nelson was inspired by peer-focused groups around the country doing similar work. Groups with national reach like Voices for Vaccines and regional groups like Vax Northwest in Washington state take a similar approach, encouraging parents to get educated and share facts about vaccines with other parents.”

Let’s ask her what she needs and then support her, again in the same way that FEMA supports the first responders who live in communities affected by a disaster.

Now, here’s where I need your help. What is missing from this model? What dimensions and examples would you add to it? Or do you fundamentally disagree with it?

When I shared it with participants in the Digital Health Promotion Executive Leadership Summit on June 3, 2019, they suggested:

On Twitter, @Init4Health shared a link to an article about Susan Nasif, MD, a “virologist-turned-cartoonist” who creates comics that educate kids about flu, polio, Zika, and other diseases.

What else are you seeing in the field? Please share ideas and observations in the comments.