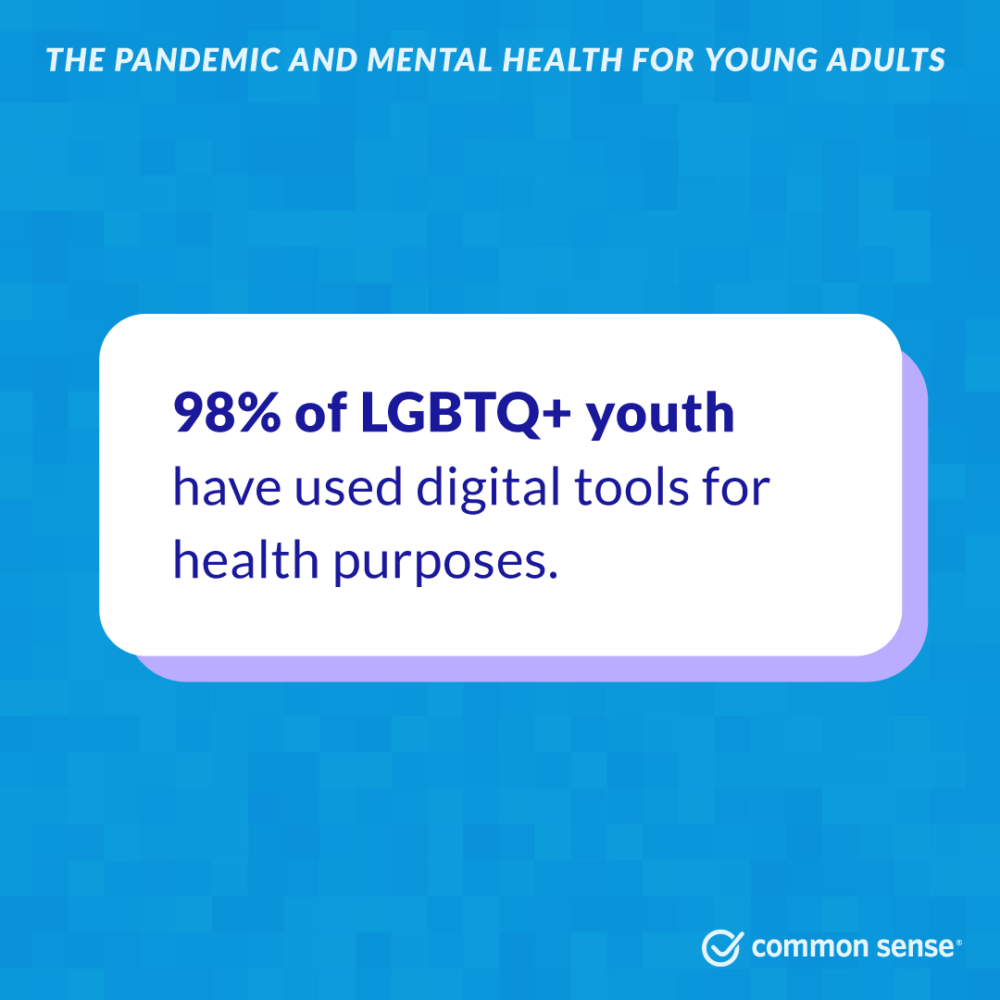 In partnership with Vicky Rideout and I, Common Sense Media created fact sheets about multiple groups included in our national study (Latinx, Black, female, LGBTQ+ youth, to name a few) and I thought I’d share each slice of data in a series of posts.

LGBTQ+ teens and young adults are among the most likely to report symptoms of moderate to severe depression: 65%, compared with 31% of non-LGBTQ+ youth. But there are hopeful findings, too. LGBTQ+ youth are highly likely to grab every chance they get for online connection and information.

Here are the details:

16% of respondents in the survey identified as lesbian, gay, or bisexual, or as transgender or nonbinary. We refer to these respondents as LGBTQ+.

98% of LGBTQ+ youth have used digital tools for health purposes, such as seeking health information online, using a health-related app, connecting to a provider, or finding others online with similar health concerns.

More than half of LGBTQ+ youth (58%) have used telehealth services to connect with providers online, significantly more than non-LGBTQ+ youth (45%).

However, many LGBTQ+ youth have positive opinions about social media, especially during the era of COVID-19:

Our survey is one window into the lives of teens and young adults. I hope it’s useful for those who seek to inject data and young people’s own voices into the public conversation.

Which data points resonate with you? Which surprise you? Please let me know what you think in the comments.

How we asked about gender and sexual orientation:

What sex were you assigned at birth, on your original birth certificate?

How do you describe your gender?

Do you identify as transgender?

This next question is about sexual orientation. Which of the following best represents how you think of yourself?

For previous research on LGBT youth and online use, see “Out Online,” published in 2013 by the Gay, Lesbian & Straight Education Network. In addition, Gallup’s latest measure of the LGBT population in the U.S. matches ours: 15.9% of those born between 1997 and 2002.

Special thanks to Alanna Peebles, PhD, of Common Sense for preparing these fact sheets: