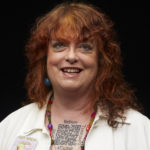 Casey Quinlan, in response to “As She Lay Dying” – a son calls on the health system to involve patients and families in improving safety

I’ll apologize in advance for the screaming screed that is about to commence. That said, get a beverage, even a snack, ’cause this will be epic.

My first e-patient experience was back in the days before Roe v. Wade. I’ll let you figure out the whole story there on your own, but I learned how to successfully navigate a system that did NOT want me to get the care I had decided, as an adult, that I needed. And I did succeed.

I spent many years working in network news, doing my share of health/medicine-related stories. I picked up all sorts of information and language. As someone who started her adult life pursuing an acting career, I’m good at “act as if” behavior and being a chameleon. Most docs think I’m a doc, and ALL nurses think I’m a doc. If asked, I say “no”, but if not asked … I love getting the REAL information. ALL of it.

My mother had a pituitary tumor DX in ’79. They’re somewhat rare, and the surgery for them was draconian, in the way of surgery before the development of micro-surgery tech. The sequalae included pharmaceutical endocrine management, a big part of which was corticosteroids.

By the mid-’90s, my mother’s endocrine system had become somewhat brittle. She had what we all – including her – called “Mom’s sinking spells”, wherein she’d suddenly be overwhelmed with lethargy. These episodes progressed to the point that, during the NHL playoff season of ’95, which I was covering, I got a phone call during the pregame one night saying that my mother had been rushed to the hospital in pretty dire shape.

I ran out of Madison Square Garden toward the parking lot where my car was, and screamed down I95 to Alexandria Hospital. The scene when I got there wasn’t great. Mom was almost non-responsive, her BP and HR had sunk to alarmingly low levels, and the attending was … pensive. Saying that we should watch and wait, see how she was in the morning. At noon. Later today.

Finally, I braced him in the hallway outside her room, where my father was holding her hand and looking like he was preparing for a final goodbye to the woman he’d danced, laughed, and traveled the world with for over 50 years. The doc’s big idea, his entire protocol for mom’s condition?

I literally backed him up toward the wall. I’m 5’8″ in my socks, and I am not a small woman. I’m also as fierce as 20+ years living in NYC and working net news can make a person.

I asked him what his reaction to “she’s had a long life” would be if it was his mother lying in that bed. My nose was almost touching his. He slid away from me. Within 5 minutes, mom was being moved from the med floor she was on to CCU.

Finally. We’d been asking for that since I’d arrived. I know that my almost-got-physical stare-down with Dr. Dickhead made it happen. Why the hell did I have to almost threaten the guy to get him to do something that was clearly called for??

That was the galvanic moment that I woke up, and realized that I had to advocate for my parents in their trips thru the health care car wash.

My dad’s turn in the box was the following year. He had Parkinson’s, but had, by actively participating in his care via regular conversations with his neuro and voracious research and reading about his disease and the ongoing research studies into treatment and management of it, become a very proactive patient.

He also had terrible osteoarthritis. All his years of tailhook landings – he was in the 1st wave of jet fighter pilots in the Navy, was literally Top Gun at Miramar twice – had given him OA in every part of his spine, which he managed by staying active. He played 18 holes of golf, walking with his bag in a wheeled cart, three or four days a week. He stretched. He walked. He climbed stairs.

However, his right hip was seizing up from OA. He was having terrible trouble walking, and decided to get the hip replacement an orthopedist had recommended.

When his surgery was complete, the surgeon came to talk to us – mom, sis, bro, and me – in the family room at Alexandria Hospital. With my father’s blood on his scrubs, the first words out of his mouth were, “Just how bad is the Parkinson’s in that leg?” My first thought was, “Daddy is SO screwed.”

And he was. Dr. SurgeonFail had used an appliance for which’s specs my dad, at 6’3″, was at the very upper limit.

I learned a lot about how much doctors DON’T tell patients in the aftermath of this epic screw-up. First, you gotta know that a going-home protocol that includes putting a contractor garbage bag on the back seat to facilitate sliding the patient in doesn’t give one the warm’n’fuzzies. Second, when your father’s newly-implanted hip, with still-unhealed surgery incisions surrounding it, DISLOCATES while you’re holding/cradling/helping him out of the car – sliding across said plastic-bag sheeting – the screaming will give you PTSD-level flashbacks for the rest of your life.

I know this, because I have those flashbacks.

The following 2.5 years included more hospital stays, 18 dislocations, and finally a return to the OR (different doctor!) for a complete revision, including a new & different appliance implanted. Which, blessedly, stayed solid.

My point with all of this? Even in the almost-20 years since all this excitement commenced, I still retain memories of how my frustration and, yes, rage at the buffoonery I saw in medicine has not lessened. Because the buffoonery is still going on.

If a Harvard MD struggles to get the right care for his family, what hope does a “civilian” have?

We have to get the medical-industrial complex to recognize that they are NOT gods. They do NOT always know all the answers. They MUST let patients, and their families/caregivers, help.

THEY MUST LISTEN. They must learn humility. They must recognize their own, and our, humanity.

Featured image: “Cancer for Christmas” by Regina Holliday. Learn more about The Walking Gallery and how you can help.