Below are the key findings of a report published in July 2018 by Hopelab and Well Being Trust. Full report: Digital Health Practices, Social Media Use, and Mental Well-Being Among Teens and Young Adults in the U.S., by Victoria Rideout, M.A. and Susannah Fox.

The report is based on a nationally representative, probability-based survey of more than 1,300 U.S. teens and young adults, ages 14 to 22, conducted in February and March 2018. For more details, please see the methodology.

The survey was conducted among 14- to 22-year-olds. Throughout the report, we refer to this population as “teens and young adults,” or TYAs. We also occasionally use the terms “youth” or “young people” as shorthand. And we discuss two developmentally distinct sub-populations as part of this broader group: “teens” (14 to 17 years old) and “young adults” (18 to 22 years old).

Teens (14- to 17-year-olds) and young adults (18- to 22-year-olds) describe making extensive use of a wide range of digital resources to access health information, tools, peer support, and providers online. 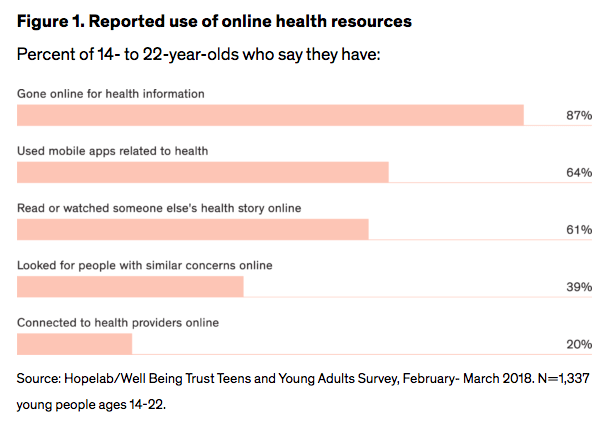 Young people who report symptoms of depression are using digital tools to learn about and help address their problems.

Social media is an integral part of young peoples’ lives, with many teens and young adults reporting a mix of both positive and negative aspects to its use. 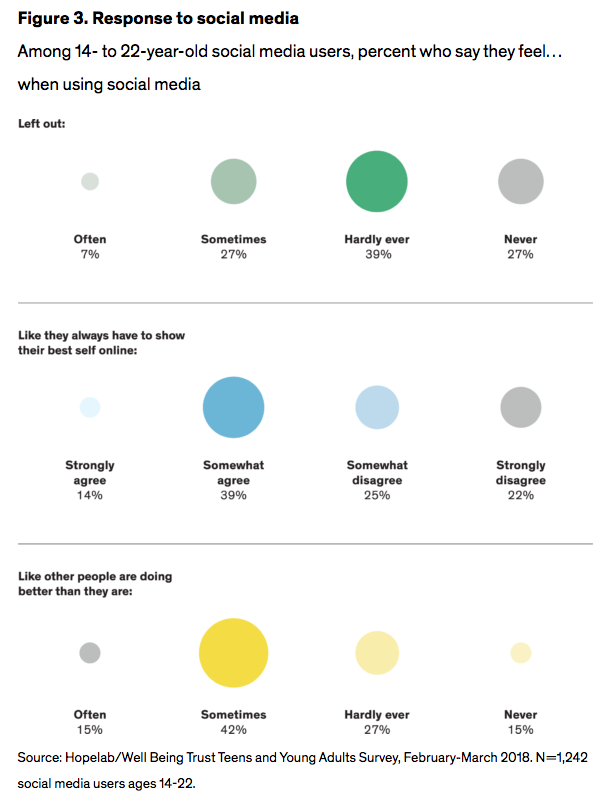 This survey did not find a statistically significant bivariate relationship between how frequently young people use social media and their current symptoms of depression.

Again, because this survey only captures respondents’ own reports about their social media use, we do not know how well these findings correlate with objectively-measured behavior. And because this survey asked “how often” but did not ask respondents to estimate the total amount of time they spend on social media per day, it is possible that there are differences in the length of time devoted to social media use that don’t show up in our measures of frequency of use. And finally, the data presented here are for the population of 14- to 22-year-olds as whole; it is possible that more detailed future analyses may uncover relationships in specific subsets of this population. 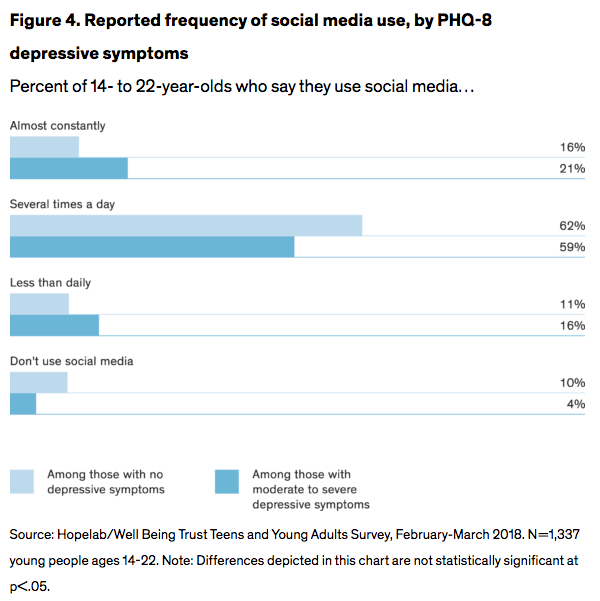 Young people with moderate to severe depressive symptoms report having heightened responses to social media – both positive and negative—than those without symptoms of depression. 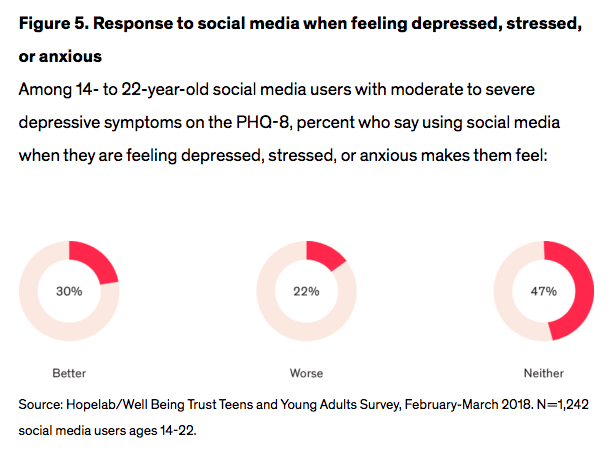 For young people with moderate to severe depressive symptoms, social media may be more important than for youth without depressive symptoms when it comes to feeling less alone, finding inspiration, and providing a venue for creative self-expression. 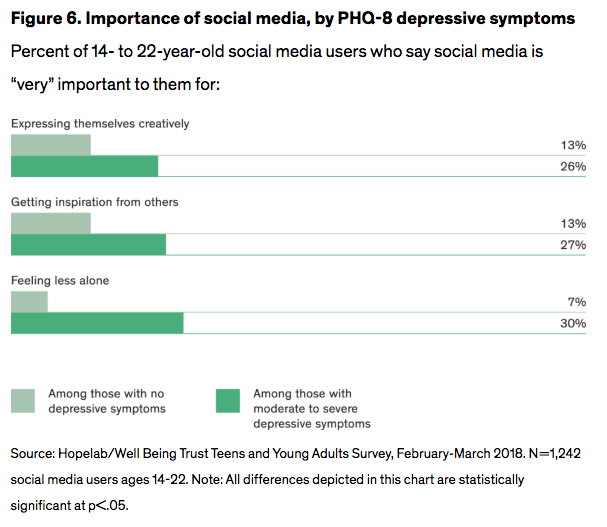 However, teens and young adults with moderate to severe depressive symptoms are more likely than other young people to say they have certain negative experiences on social media.

They are more likely to say they: 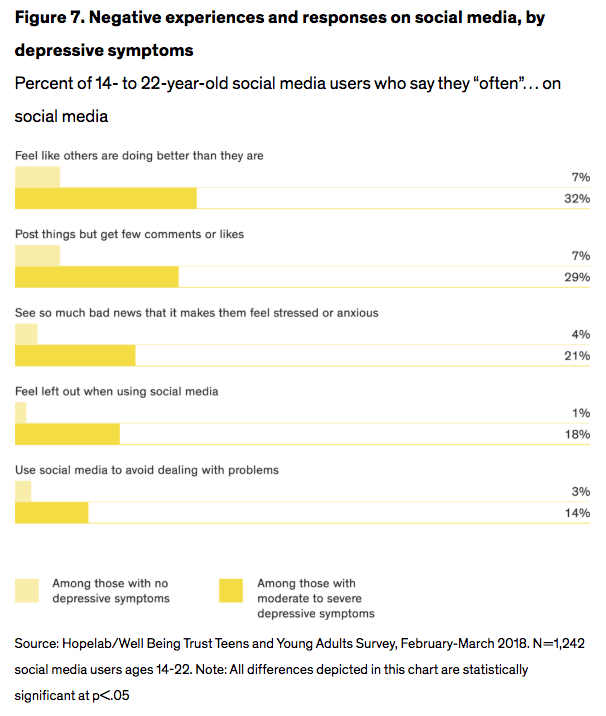 This survey did not find a statistically significant association between depressive symptoms and whether respondents reported engaging in more “active” or “passive” behaviors on social media.

Females and LGBTQ youth are more likely than others their age to report seeking online resources related to mental well-being. 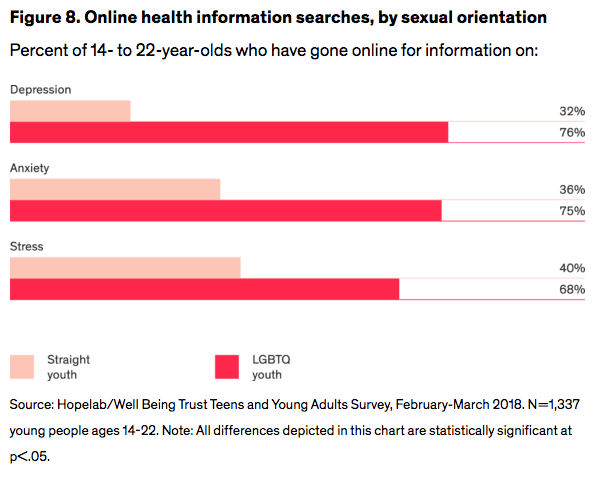 Based on more than 400 open-ended responses provided by teens and young adults describing how they use social media when they are feeling depressed, stressed, or anxious, it appears that:

“It just helps me feel outside myself for a bit and find interesting topics I’d like to ponder on. When you’re depressed, it’s easy to get caught in a loop but through actively reading every day through social media I can always be preoccupied with information.”

“Social media makes me feel worse when I’m scrolling through feeds and seeing news headlines and posts about how terrible something is.”

“Social media makes me laugh and keeps me distracted so that I have time to breathe and collect myself.”

“It’s much easier for me to reach out for help on social media than in person. There’s less pressure and I can leave it there and live my life outside of it without thinking about it too much.”

“I follow a lot of positive pages on social media, so I feel better when I see a funny video or a cute video.”

“If I’m feeling depressed, getting on Twitter and seeing funny tweets or watching funny videos on YouTube can really brighten my mood.”

“It makes me feel better because I can read encouragement and find inspiration to keep myself motivated when I am feeling anxious.”

“Usually friends post happy things – getting together with others, accomplishments, bragging. I don’t always want to see it when I’m feeling down about myself so I stay off social media.”

“Whenever I’m having an anxiety attack I have to put down my phone and calm down.”

“I stop after posting some sad negative stuff and find an actual friend to meet with in person.”

“When I feel upset I just stay off social media all together.”

“Sometimes I am aware of how bad it makes me feel but I keep using it just because I want to continue my self-loathing.”

“Social media…makes things worse simply because I have told myself time and time again that I wouldn’t spend so much time mindlessly scrolling through other people’s lives.”

“I feel like I am not good enough compared to other people. I often look at other people[‘s] pages and compare myself to them.”

For more data on teens vs. young adults see: