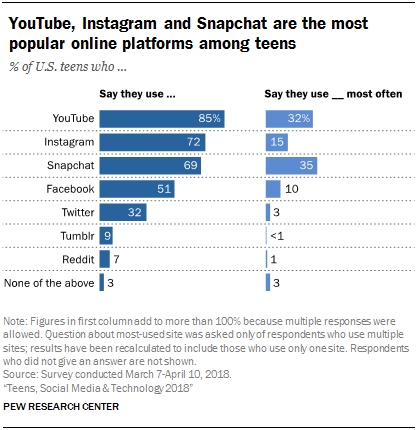 Below are excerpts from three research reports focused on teens and young adults:

84% of teens say they have or have access to a game console at home, and 90% say they play video games of any kind. (Pew Internet)

Nine in ten teens are online daily: 45% say they use the internet “almost constantly” and an additional 44% say they go online several times a day. (Pew Internet)

Social media use among teens and young adults:

YouTube, Instagram, and Snapchat are the most popular online platforms among teens – see chart above. (Pew Internet)

70% of teens say they use social media sites multiple times per day and 57% of teens agree that social media distracts them from doing their homework. (Common Sense Media)

14% of teens say they “often” post selfies, compared with 8% of young adults. (Hopelab/Well Being Trust)

All data points below are drawn from the report sponsored by Hopelab/Well Being Trust.

Young adults (18- to 22-year-olds) are more likely than teens (14- to 17-year-olds) to say they access all types of online health resources – information, peer advice, personal stories, connections to health providers, and health-related apps. There are no differences in how helpful those in different age groups find the online resources they use.