Below are excerpts from three research reports focused on teens and young adults:

The Hopelab and Well Being Trust (HL/WBT) report is based on a nationally representative, probability-based survey of more than 1,300 U.S. teens and young adults, ages 14 to 22, conducted in February and March 2018. Among other demographic measures asked at the end of the survey, the following questions were asked of all respondents:

For analysis based on gender, only those who identify as either male or female, whether transgender or not, were included in the HL/WBT report.

Device ownership among teens, by gender: 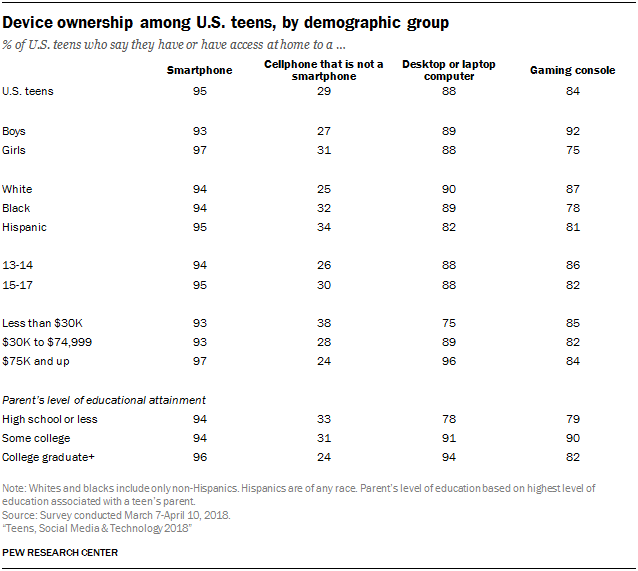 Social media use among teens and young adults, by gender:

93% of both female and male teens and young adults say they use at least one social media site. Young women are more likely than young men to use Instagram, Facebook, and Snapchat. (HL/WBT)

Communication preferences among teens, by gender:

Digital health practices among teens and young adults, by gender:

Among 14- to 22-year-olds, females are more likely than males to report making use of digital health tools, including going online for health information, looking for peer-to-peer health advice online, and using mobile health apps. There are no differences in how helpful females and males find the online resources they use. (HL/WBT)