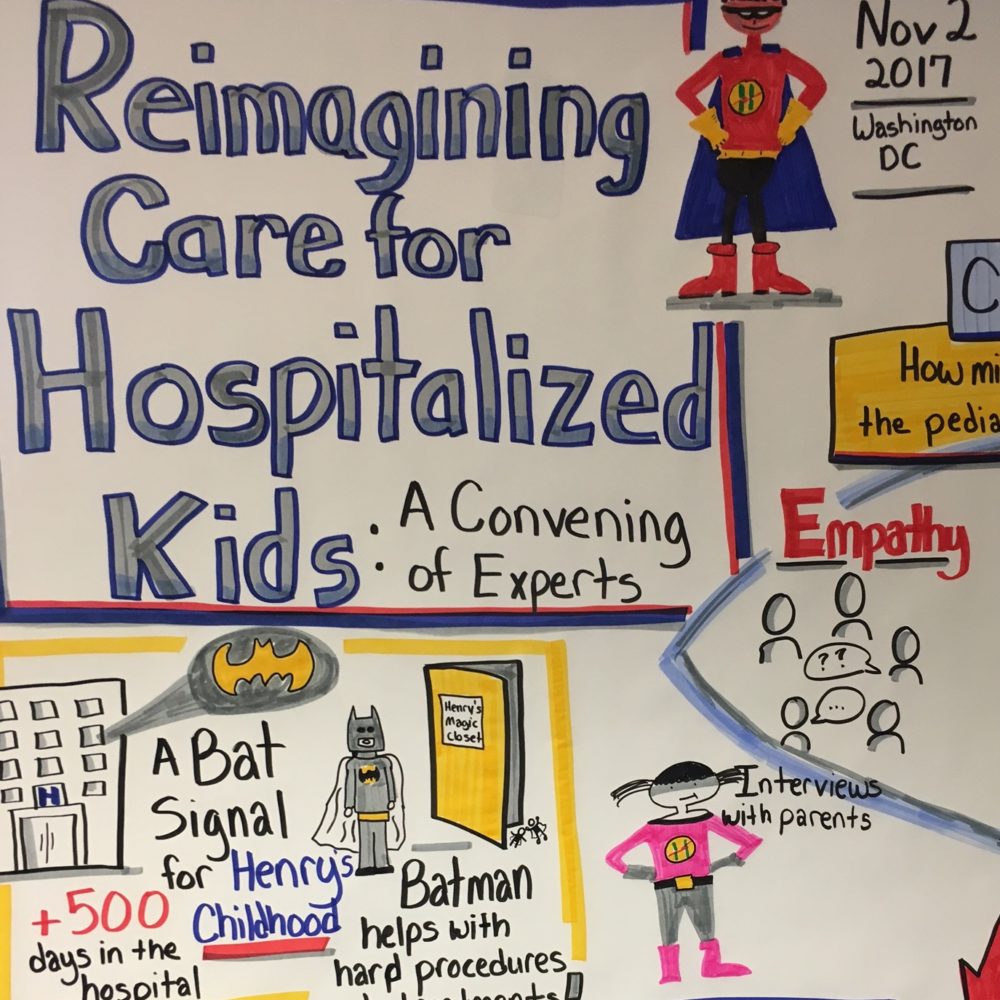 On Nov. 1-2, 2017, Hope for Henry convened a diverse group of parents, kids, clinicians, designers, educators, and entrepreneurs to reimagine care for hospitalized kids.

I’ll disclose that I am an advisor to Hope for Henry and helped organize the event, but I hope you’ll believe me when I say that it was, objectively, a truly awesome day. Not only because I got to work again with Dean Chang and his team from the University of Maryland’s Academy for Innovation & Entrepreneurship (with whom I worked at HHS) nor because my 4-person team came up with a peer-to-peer solution (without me pushing it, I swear!), but because, once again, including patients and caregivers in the conversation was transformational.

We kicked off the event with a dinner reception that included a panel of three young adults who had spent huge swaths of their childhood and adolescent years in the hospital. They shared stories about the pain of treatments, the boredom, and the people who made a difference in their lives (their eyes lit up when talking about their favorite doctors, nurses, and child-life specialists).

We then watched a talk given by Doug Dietz, principal designer for GE Healthcare. Watch it in full if you have time:

He talks about how the diagnostic imaging machine he designed — and was so proud of — looked like a beige brick or even a giant stapler. It was about as frightening as it could possibly be and, no surprise, 80% of children need to be sedated before they are scanned. So he started re-imagining the experience from the point of view of a child. As Dietz says, “When you design for meaning, good things will happen.”

That’s where we picked up the conversation the next day. We broke into small groups and interviewed a parent whose child had experienced long-term hospitalization. The parent assigned to each group was asked to tell any story they’d like about diagnosis, treatments, life in the hospital — any aspect of their child’s experience — while we took notes. We then brainstormed ideas for solving some of the challenges this particular kid faced during his hospitalization.

Here’s the crazy collection of Post-it notes my group generated (note that we were told at one point to dream up interventions that would cost a minimum of a million dollars or to include a banana): 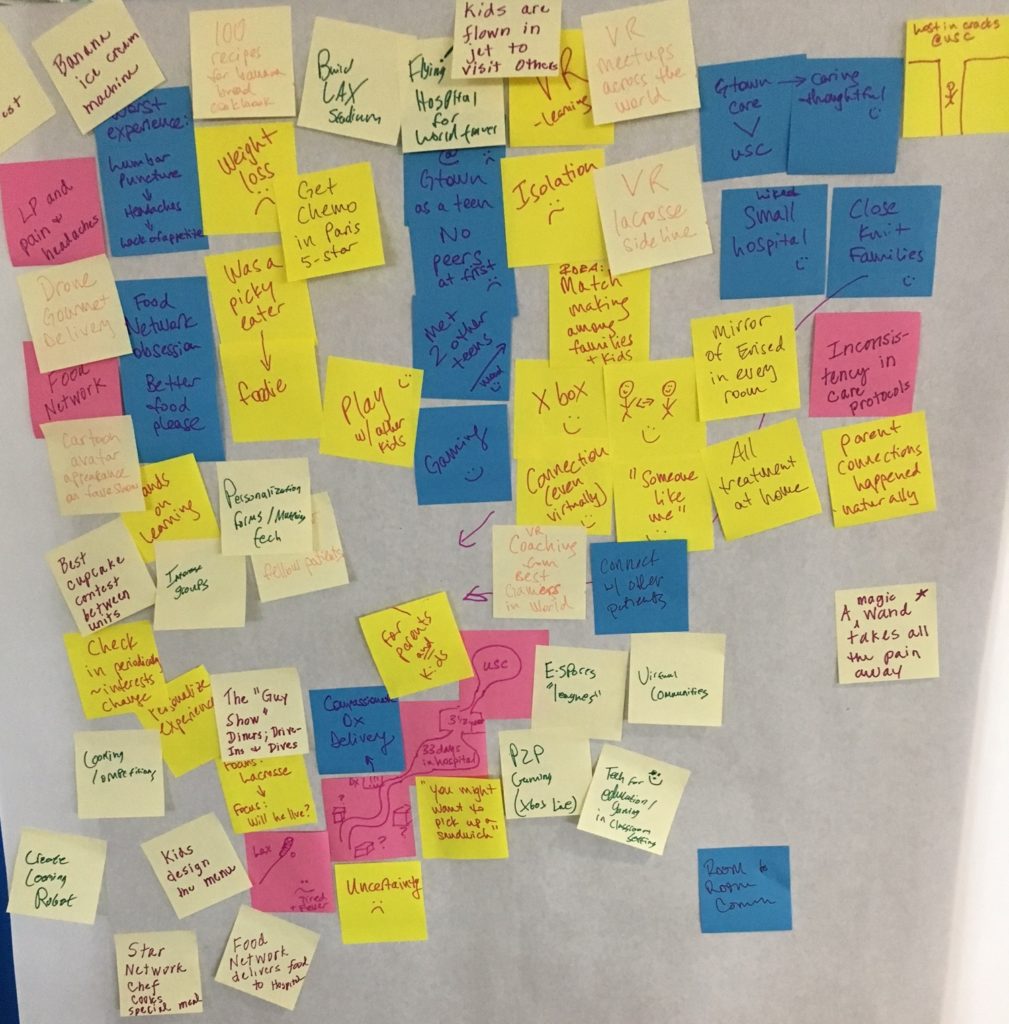 We chose one challenge to focus on: Loneliness. The parent described how, as a teenager, the kid felt isolated from his friends while undergoing treatment. His mood took a huge turn for the better when he met two other teenagers who were also being treated at the same hospital. All of a sudden he had peers, people to hang out with and play Xbox.

The four of us — a doctor, an engineer, a parent (of a different kid), and I — set about designing an imaginary product that would solve this issue of isolation. We answered key questions like:

Which brings me to one of the most important lessons I’ve learned about successful meetings:  Go into any room where arts & crafts materials are laid out (Lesson #6 from Health Foo). The Hope for Henry event was no exception to this rule. This was my favorite part of the day: Prototyping with pipe cleaners and aluminum foil! 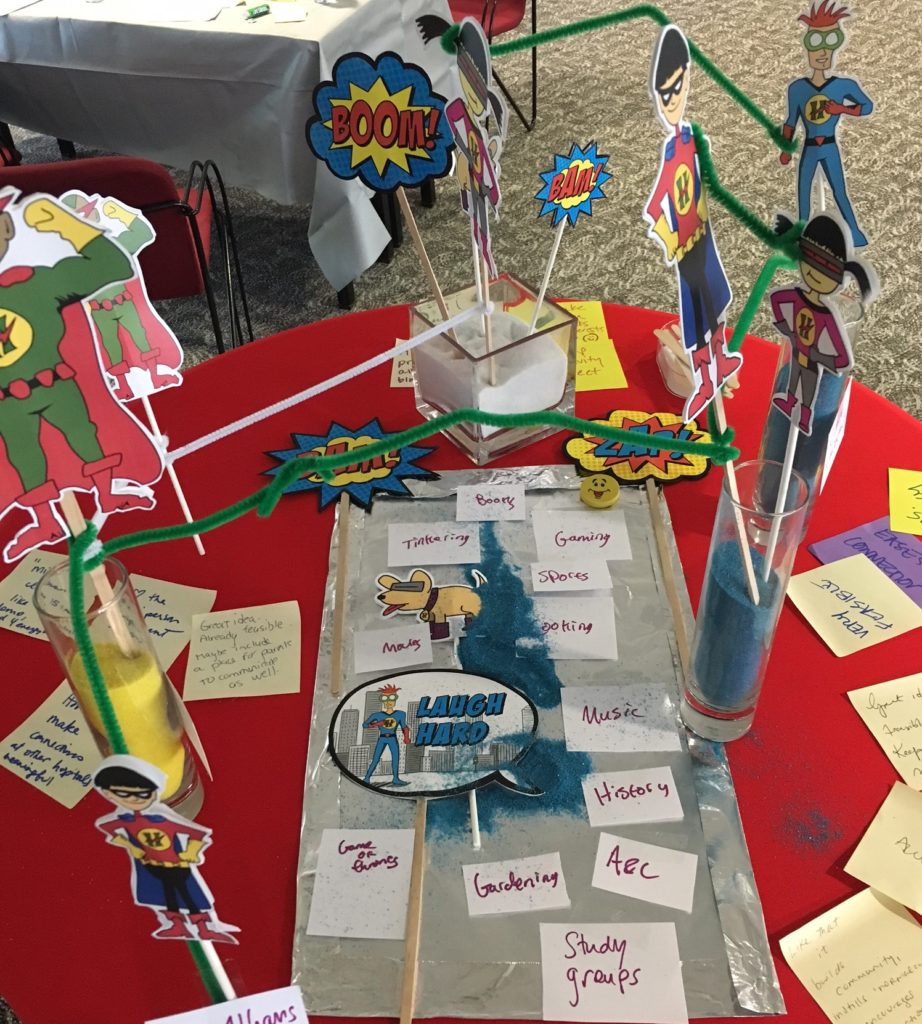 Our idea is to create an app that asks kids fun questions (likes, dislikes, hobbies, interests) and then matches them with a peer who is either in the same hospital or available for virtual hang-outs. The picture above shows our concept — the pipe cleaners are meant to be connections between kids (pay no attention to the blue sand that spilled when we moved our prototype across the room for feedback from another group).

Other ideas that emerged from other groups are listed on the poster below: 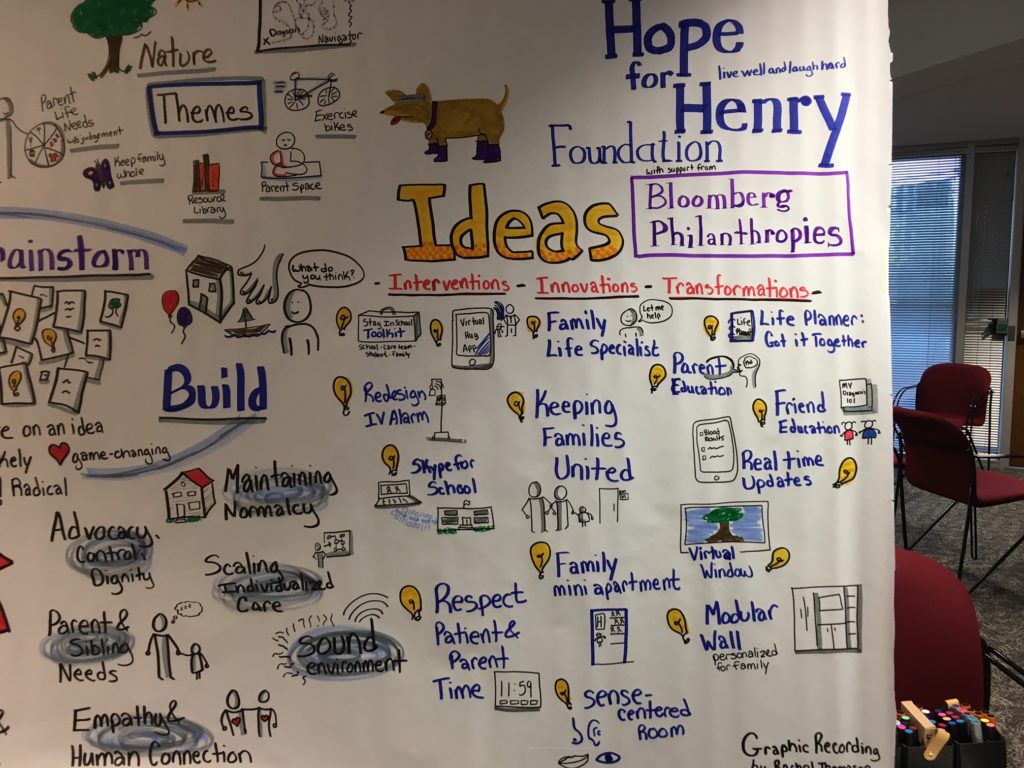 The day ended with the full group coming back together to present our ideas and share not only what we learned, but also where we want to take the projects next.

If you are interested in contributing to Hope for Henry’s mission to reimagine care for hospitalized kids, please leave a comment and I’ll be sure to connect you with the team.