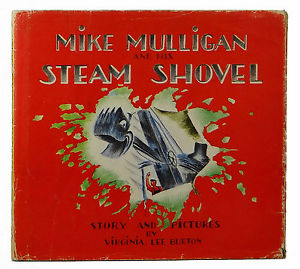 In 2010, I was inspired by Animal Farm to write that Google saw some health sites as more equal than others. This time I turned to Mike Mulligan and his Steam Shovel, by Virginia Lee Burton.

If you don’t know the story, Mike boasts that he and his steam shovel, Mary Anne, can dig the foundation for a new town hall in just one day. He says that if they fail, the town won’t have to pay him at all. A crafty town selectman, Henry B. Swap, sees an opportunity to get part of the job done for free and “smiles in a rather mean way” as they seal the deal.

Mike and Mary Anne set to work, digging as if for their lives, gaining strength from the support of the crowd that gathers to watch.

My favorite illustration shows the swirl of dirt, dust, and steam as Mary Anne bites away at the earth:

The dust settles at sundown and Mike is at first triumphant: They did it! They dug the foundation in just one day.

But Mike had failed to plan for a way to get Mary Anne out of the hole. Again the crafty Henry B. Swap smiles in a rather mean way, savoring his victory over the upstart. It’s a disheartening turn of events.

But wait! The cynics don’t win! A little boy suggests that Mary Anne’s powerful steam engine could become the furnace of the new town hall if they build it around her.

‘Why not?’ said Henry B. Swap, and smiled in a way that was not quite so mean.

Relief floods through me even now, reading that line.

Why am I telling you all this?

Because, at their very best, I see technology companies (even a behemoth like Google), playing the roles of Mike and Mary Anne: bold, brash, and not afraid to take on audacious goals. We need that in health care.

I see establishment health care, at its worst, playing the role of Henry B. Swap – arms crossed, as if to say, “oh, you think you’re so smart,” and smiling in a rather mean way as the techies fail.

Consumers play the role of the community that comes out to watch. Some are there to cheer, some just to gawk at the spectacle, but we all hope that somehow, some day, the problems will get solved.

Note that the story is not a perfect analogy. Mike and his steam shovel, Mary Anne, represent a dying form of technology, as other bloggers point out here and here.

But try to see what I see:

Yes, Dr. Google can dump you into a sewer of misinformation.

Yes, it is easy to poke holes in wearables.

But these companies are TRYING.

Think about it: Who offers the innovative solution that saves the day in the storybook? A child. Someone outside the “we know best” adult world.

Who plays that outsider role in health care? Patients and caregivers.

I’m an advisor to Iodine and Stanford Medicine X, which I mention or link to in the post.

When I searched online for images of Henry B. Swap I stumbled on a wonderful list of words we wish we had in English, such as:

Glas wen (Welsh): Literally, a “blue smile” – a smile that is insincere or mocking.

Henry B. Swap was the illustration.

I also found a video of someone reading the storybook out loud and someone who tweeted it, line by line. I love the internet.