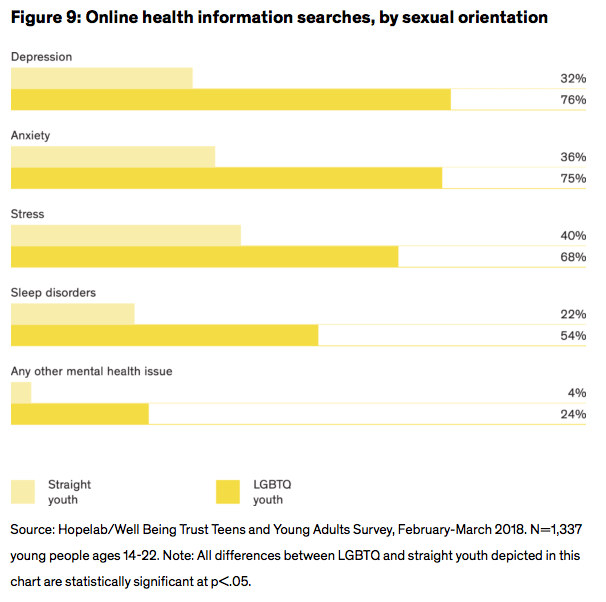 Below are excerpts of a report written by Victoria Rideout, M.A. and Susannah Fox and published in July 2018 by Hopelab and Well Being Trust.

The survey was conducted between February 12 and March 19, 2018, with 1,337 young people ages 14 to 22 representing the 50 states and the District of Columbia. Interviews were offered in English or Spanish, and were conducted either online or by telephone, depending on respondent preference.

We used a two-step method to ask respondents about their current gender identity and their assigned sex at birth. Separately, we asked about their sexual orientation. The following questions were asked of all respondents at the end of the survey, along with other demographic measures:

We chose to use the inclusive acronym LGBTQ to represent the 162 young people who identify as something other than cisgender and/or straight.

Social media use among teens and young adults who identify as LGBTQ vs. straight:

96% of LGBTQ youth use at least one social media site, which is statistically the same as the 92% of cisgender/straight youth who say the same. The same four sites are the most popular among both groups: Snapchat, Instagram, Facebook, and Twitter.

Lesbian, gay, and bisexual youth are more likely than those who identify as heterosexual to report going online for health information, accessing other people’s personal health stories online, and sharing their own health stories.

For previous research on LGBT youth and online use, see “Out Online,” published in 2013 by the Gay, Lesbian & Straight Education Network.